Skip to content
Home>anouncement, events for members, events for the public, out of ink, productions>OUT OF INK 2017: Object Lessons
Previous Next 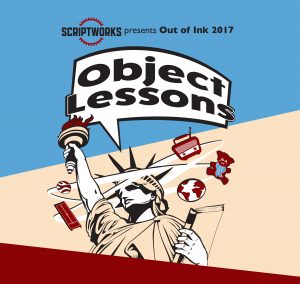 A dog’s toy, a revered text, planets, and the Statue of Liberty are just some of the objects that reveal their thoughts in ScriptWorks’ 19th annual Out of Ink ten-minute play showcase. The objects and their declarations appear courtesy of one of three contributed rules or ingredients used to write the plays. ScriptWorks members use these elements to create their ten-minute masterpieces over 48 hours during the Weekend Fling.

The ingredients for this year’s Fling were:

1) The play must somehow feature the thoughts/statements of an inanimate object.

2) The play must contain a ritual of inauguration.

3) Time continually expands or contracts for at least one of the characters.

At the end of the Weekend Fling, the plays were read in a ScriptWorks Salon at the Austin Playwrights Studio.  A selection committee chose eight plays for production in Out of Ink, from the two-dozen that were submitted.  The committee was comprised of non-applying ScriptWorks members Vicki Cheatwood, Joanna Garner, and Michael Mitchell.

The Object Lesson scripts were written by: