Skip to content
Home>anouncement, events for members, events for the public, out of ink, productions>OUT OF INK 2015: Random Acts of Magic
Previous Next 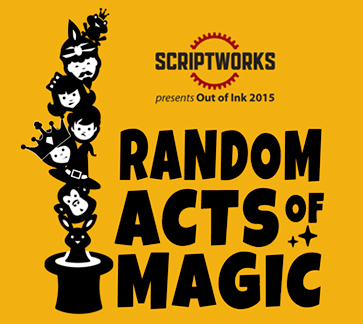 The magic of theatre can lead to unexpected changes and sometimes to reliving special moments from the past. That is especially true in this year’s Out of Ink ten-minute play showcase, which features plays written using those ideas as their jumping-off point. The plays were written during ScriptWorks’ Weekend Fling, where members have 48 hours to write 10 minute plays using three arbitrary ingredients.

This year’s elements were:
1) A piece of magic.
2) Two characters must switch clothes/costumes at least once during the play.
3) A character must revisit the most embarrassing day of their life.

The Random Acts of Magic scripts were written by: