Skip to content
Home>anouncement, events for members, events for the public, out of ink>OUT OF INK 2018: Lost & Found
Previous Next 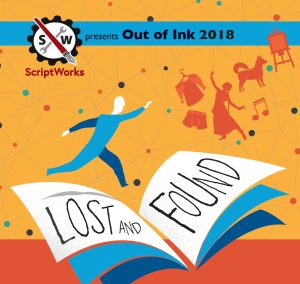 Mementos of long-lost loves, articles of clothing, a painting, and the brain of a deceased president are a few of the lost things to be found in this year’s Out of Ink production thanks to one of the three contributed rules or ingredients used to write the plays. ScriptWorks members employed these elements to create their ten-minute masterpieces over 48 hours during the Weekend Fling.

In honor of ScriptWorks’ 20th Anniversary Season and the 20th Out of Ink, we enlisted our original rule-contributors to reprise their roles this year. Casting director Vicky Boone, Austin Chronicle Arts Editor Robert Faires, and playwright Sherry Kramer provided the following ingredients:

1) An object lost 20 years ago is found.
2) At least one character must experience a reversal of fortune.
3) The play must include a folk dance.

At the end of the Weekend Fling, the plays were read in a ScriptWorks Salon at the Austin Playwrights Studio.  A selection committee chose eight plays for production in Out of Ink, from the thirty-two plays that were submitted.  The committee was comprised of non-applying ScriptWorks members Stephen Bittrich and Sheila Lynch Rinear, and lighting designer Jennifer Rogers.